Did you know that there are approximately 20 roundabouts operating on the state highway system and over 300 roundabouts on local roads throughout Florida? For many motorists, cyclists, and pedestrians, roundabouts are still a new concept. This page exists to provide you with a variety of information about roundabouts you can share, including newsletter articles, handouts, videos, suggested social media content, and graphics.

Roundabouts can be safer than traditional intersections and can shorten travel times for both drivers and pedestrians.

As motorists move through the roundabout in the same direction, the chance of a potential head-on collision is greatly reduced. In fact, roundabouts have been shown to reduce the number of fatal and severe injury crashes by 78 percent to 82 percent compared to a stop-controlled intersection or a signalized intersection, according to the Federal Highway Administration.

Furthermore, motorists must slow down when using a roundabout, helping to make the road safer.

Roundabouts also keep traffic moving, as opposed to intersections, which force drivers and pedestrians to wait at stoplights or to wait at stop signs for vehicles to cross.

How to Use a Roundabout While Driving a Vehicle

While navigating intersections comes naturally to most drivers, some might not be as used to using roundabouts.

Similar to an intersection, a motorist should decide which direction he or she wants to go in before approaching the roundabout. Always pay attention to the upcoming signage to understand which lane to take to reach your exit.

Traffic in roundabouts moves counterclockwise or, in other words, to the right.

While driving through the roundabout, the driver should stay in their lane and then exit at the street they want to go on.

If an emergency vehicle approaches, the driver should drive through the roundabout before pulling over, as they would if they were crossing an intersection during that situation.

How to Use a Roundabout as a Pedestrian or Cyclist

Pedestrians should stay on the walkways and only cross at designated crosswalks. If needed, the pedestrian can stop in the middle of the crosswalk at the splitter island. Pedestrians have the right-of-way.

Pedestrians should not enter the center island of the roundabout.

Cyclists have the choice of using a roundabout as a motorist would or by using it as a pedestrian would. If a cyclist chooses to ride with the vehicle traffic, they must follow the same rules as vehicles follow and signal which direction they will go, just as a vehicle would. If a cyclist chooses to use a walkway, they should yield right-of-way to pedestrians. Cyclists should also walk their bicycles at crosswalks.

When entering a roundabout, drivers must yield to all traffic already in the circle. Check that there is a safe gap in traffic before joining the roundabout, then take the correct lane to your exit. 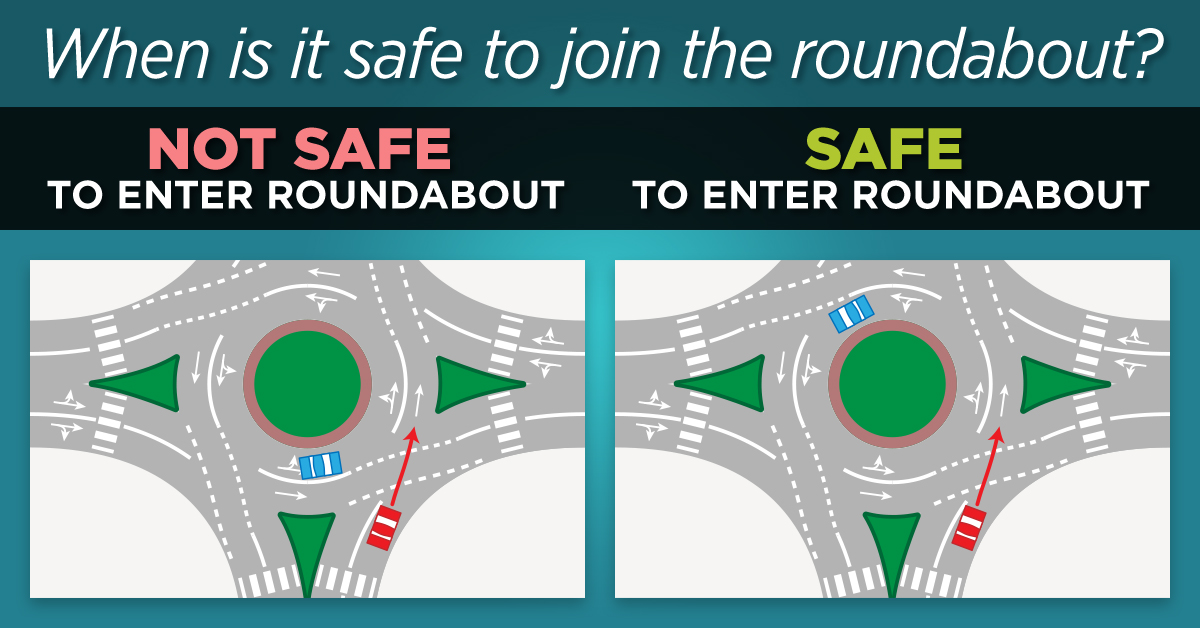 Not sure how to make your way around a roundabout? In most cases, like in the graphic below, a roundabout is just like a traditional intersection. 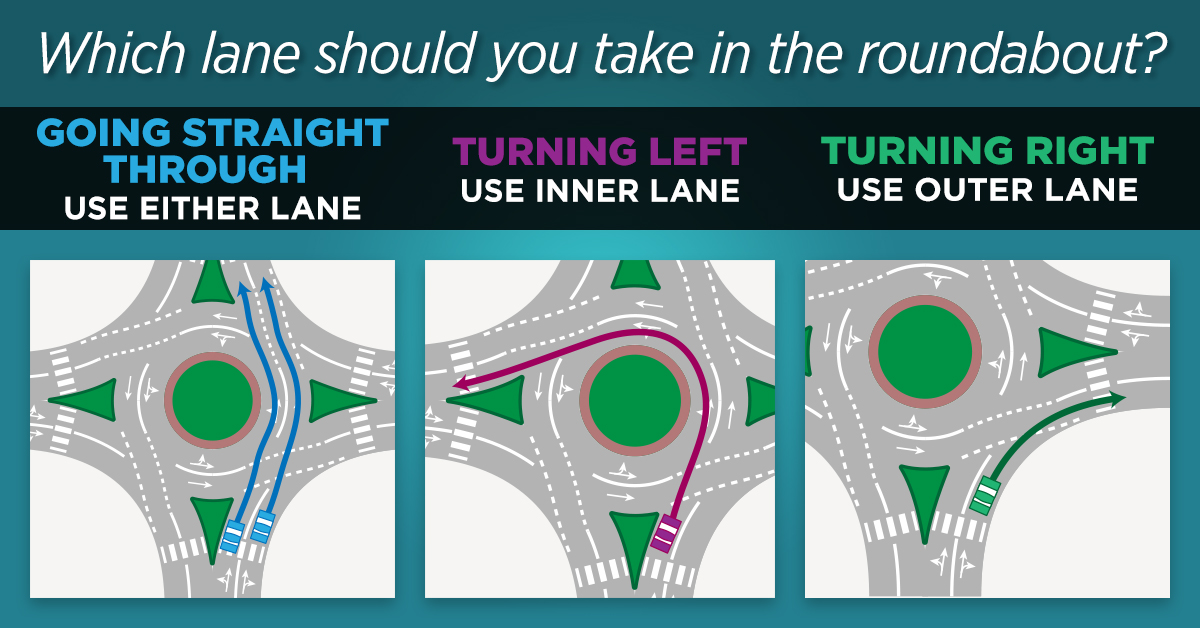 Bicyclists have two options in a roundabout: to travel with motorists, or to mount the sidewalk and use crosswalks. When cycling with traffic, signal your path. When using sidewalks, walk your bicycle at crosswalks and give pedestrians the right of way. 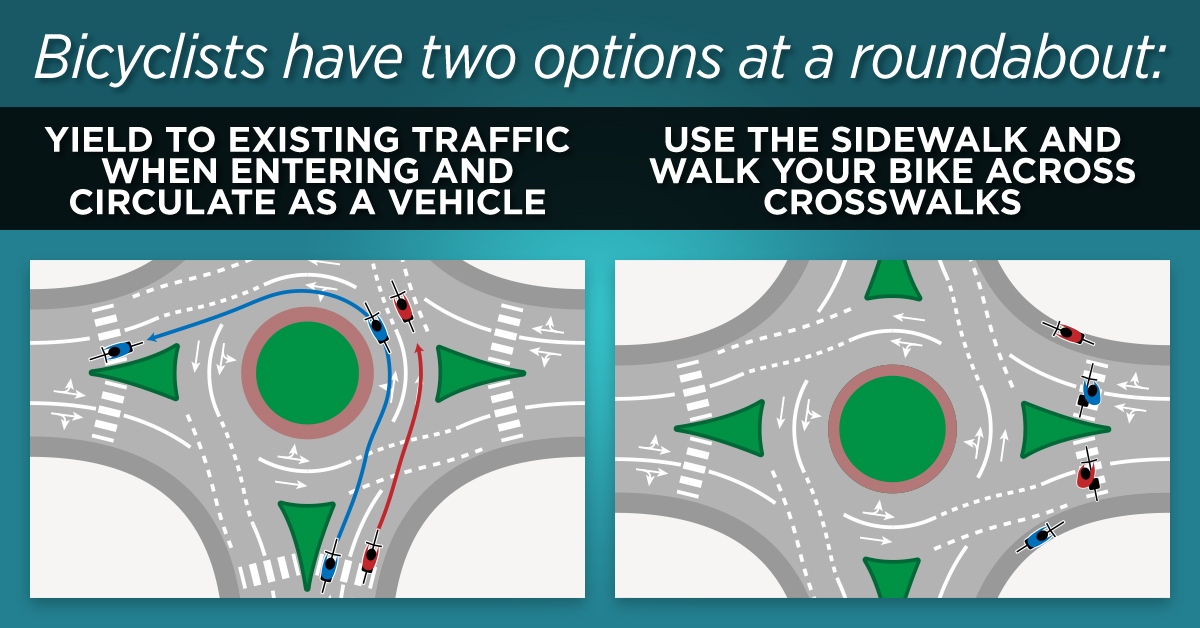 Roundabouts are designed to accommodate all vehicles, including tractor-trailers, emergency vehicles, and recreational vehicles. See how a #TruckApron around the inside of the circulating roadway provides the space needed for large vehicles. 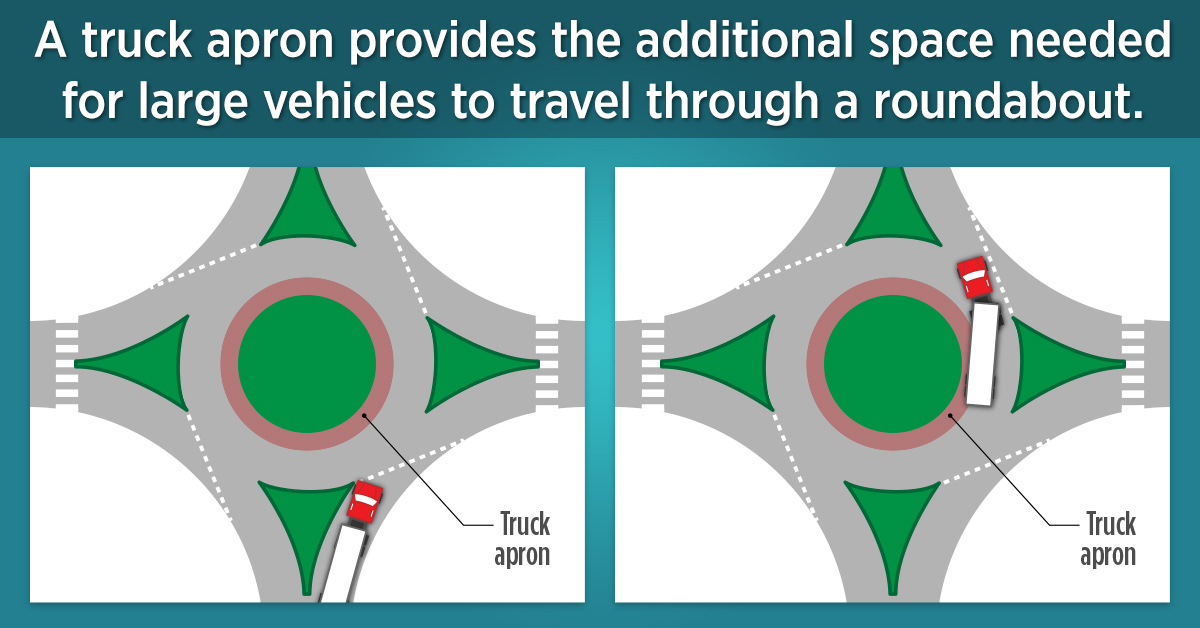 Do you know when you should yield in a #roundabout? Vehicles traveling around the center island have the right of way, while all entering vehicles yield to them and pedestrians already in the intersection. 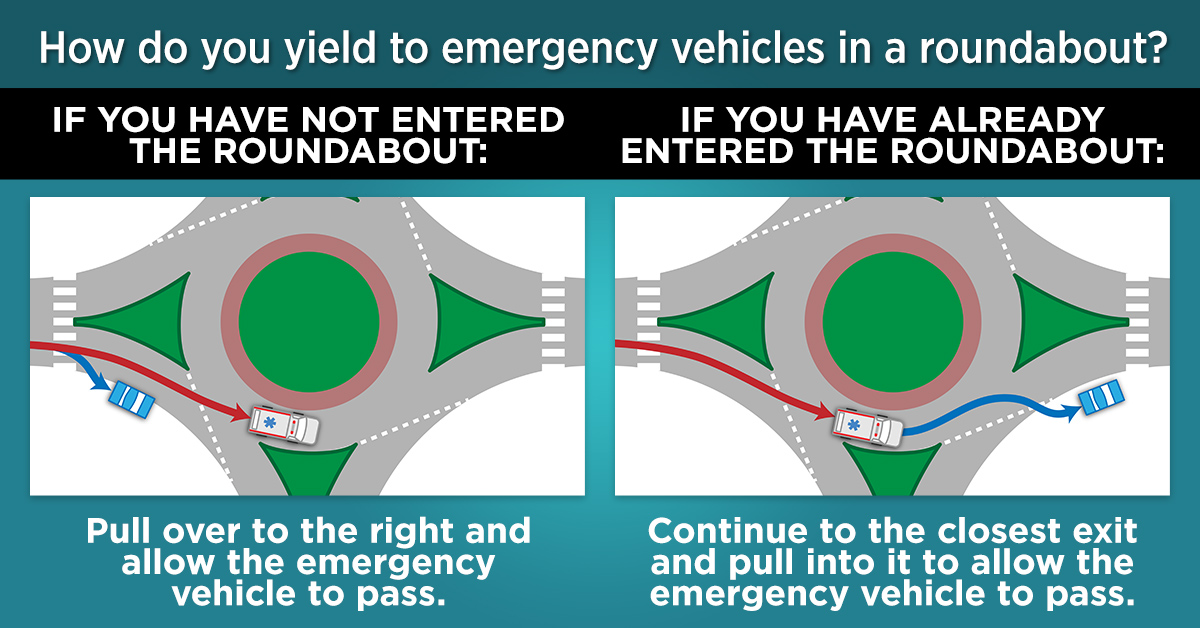 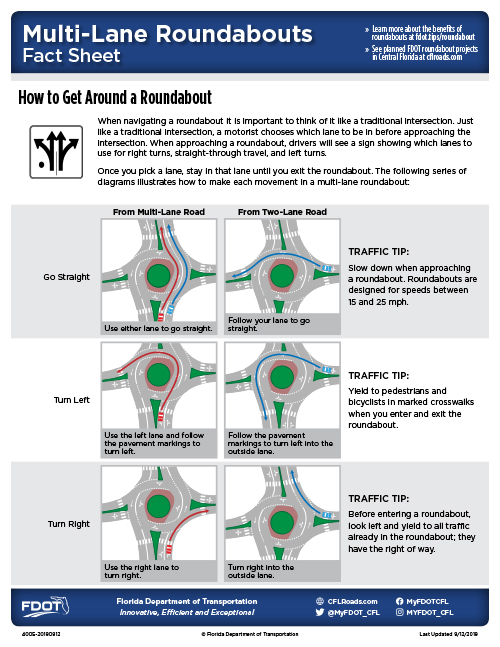 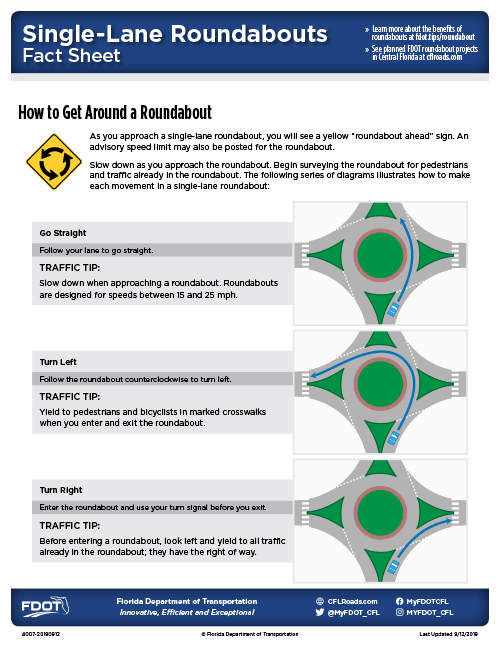 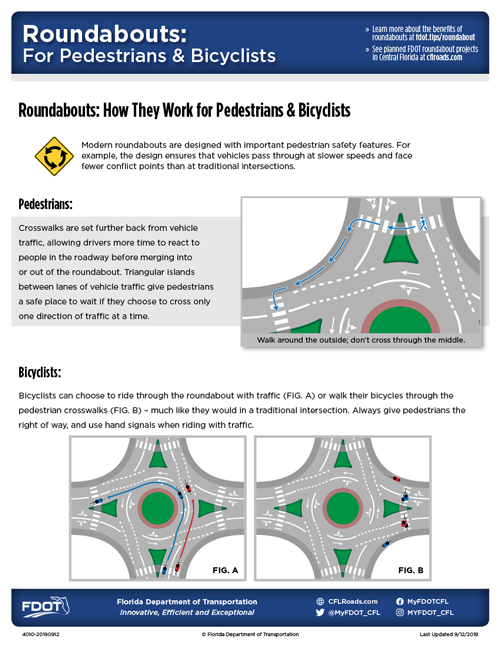 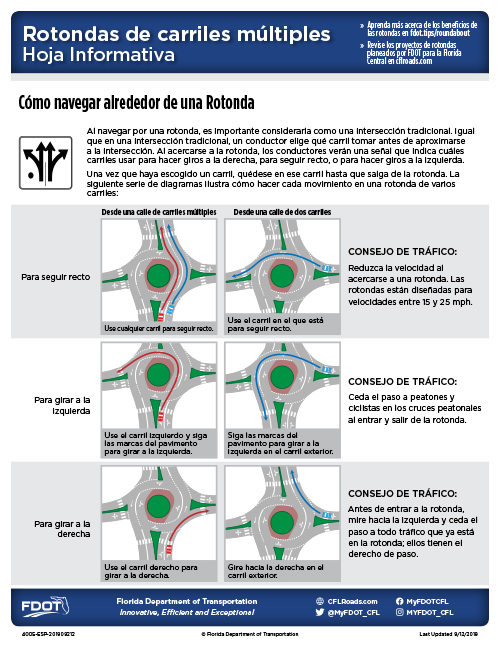 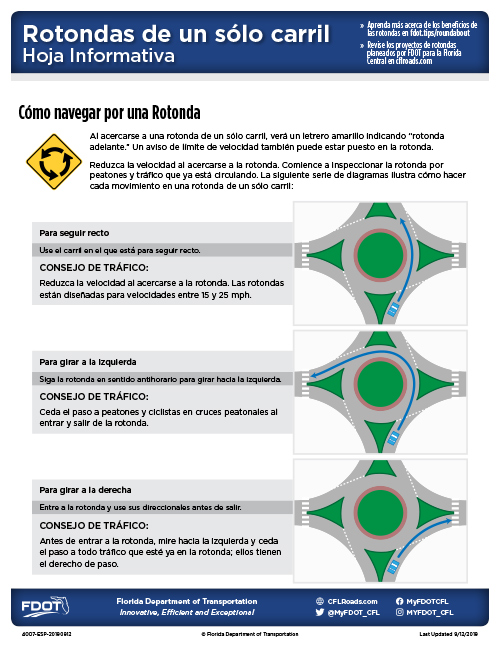 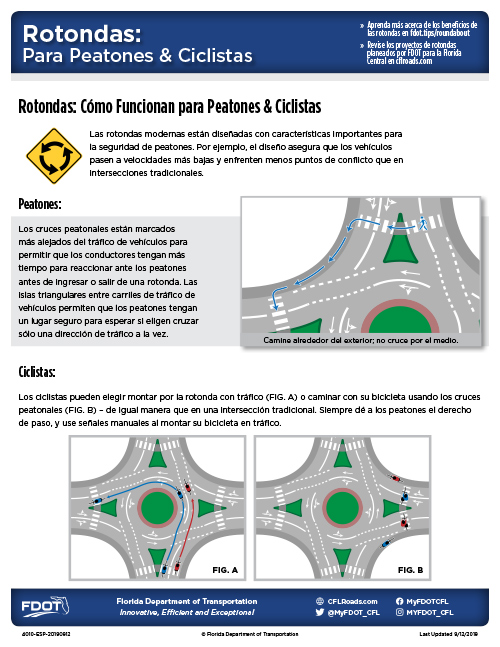 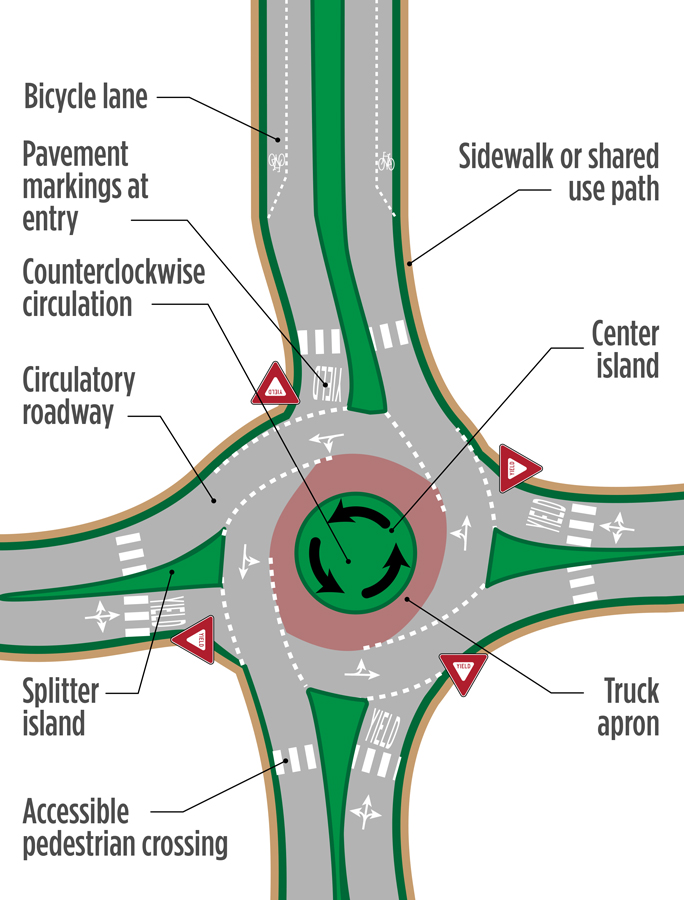