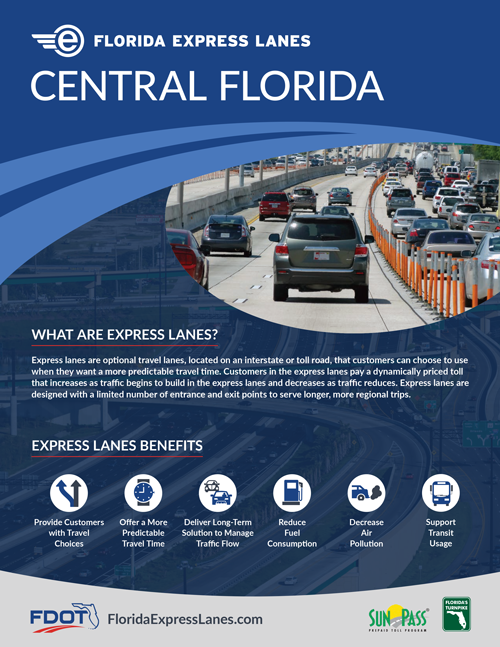 Will the addition of Express Lanes eliminate any of the non-tolled general use lanes?

The I-4 Beyond the Ultimate reconstruction project will not change the current number of non-tolled, general use lanes.

What are Express Lanes?

Express Lanes are an innovative solution to manage traffic congestion and provide choices for travelers. The project provides additional lanes with restricted access points, and dynamic toll pricing based on the level of congestion that are adjacent to the non-tolled general purpose lanes. 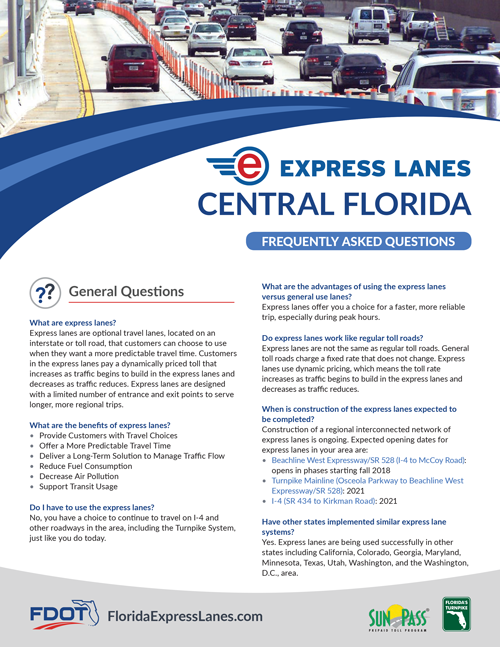 More frequently asked questions about how Express Lanes will operate.

There are two ways motorists can access and use the Express Lanes. If you’re already traveling in the general use lanes, there are express ramps on the left that will take you to and from Express Lanes. If you are traveling on a surface street or roadway near an interchange, you may have the option to use a direct connect ramp. The direct connect ramps provide access to Express Lanes from surface streets, bypassing the general use lanes.

Who Sets the Rate?

The rate structure, which FDOT is currently developing, will be designed to help keep cars in the Express Lanes moving at 50 mph. By way of comparison, drivers on I-95 Express Lanes in Miami pay a minimum of $0.50 and have paid a maximum of $10.50 to travel 7 miles, depending on traffic in the area.

What Happens if Toll Rates Change While Traveling in Express Lanes

Who Can Use the Express Lanes?

The Express Lanes will be open for use by the majority of drivers who choose to enter the lanes.

There are a few vehicle types that will be prohibited from using the lanes. At this time, heavy trucks will not be allowed in the Express Lanes. The types of trucks permitted in the Express Lanes are part of an ongoing discussion at the state level and may be based on the number of axles or weight. No trailers of any kind will be permitted, regardless of the type of vehicle towing it.

Are any Express Lanes now open in Florida?

Express Lanes are currently operating successfully on I-95 in Miami and on I-595 in Fort Lauderdale. Managed lanes projects are also currently under development in several spots around the state.

To learn more about Express Lanes in Florida, visit floridaexpresslanes.com.